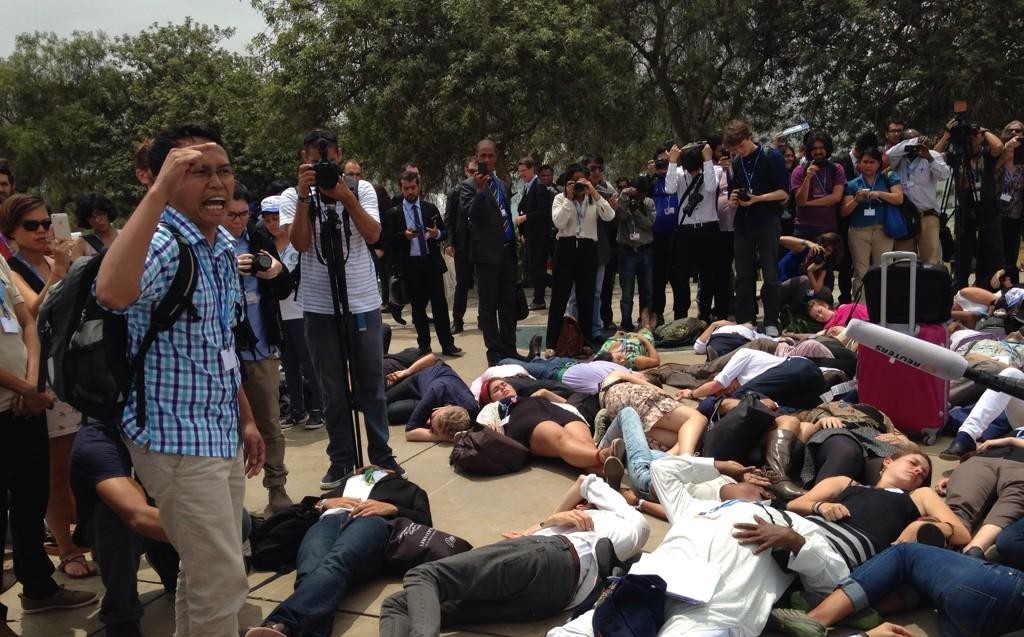 This op-ed appeared at The Nation on December 12.

The annual United Nations climate summit is wrapping up in in Lima, Peru and on its penultimate day, something historic happened. No, not the empty promises from powerful governments to finally get serious about climate action—starting in 2020 or 2030 or any time other than right now. The historic event was the decision of the climate justice movement to symbolically join the increasingly global #BlackLivesMatter uprising, staging a “die in” outside the convention center much like the ones that have brought shopping malls and busy intersections to a standstill, from the US to the UK.

“For us it is either death or climate justice,” said Gerry Arances, national coordinator for the Philippine Movement for Climate Justice.

What does #BlackLivesMatter, and the unshakable moral principle that it represents, have to do with climate change? Everything. Because we can be quite sure that if wealthy white Americans had been the ones left without food and water for days in a giant sports stadium after Hurricane Katrina, even George W. Bush would have gotten serious about climate change. Similarly if Australia were at risk of disappearing, and not large parts of Bangladesh, Prime Minister Tony Abbott would be a lot less likely to publically celebrate the burning of coal as “good for humanity,” as he did on the occasion of the opening of a vast new coalmine. And if my own city of Toronto was being battered, year after year, by historic typhoons demanding mass evacuations, and not Tacloban in the Philippines, we can also be sure that Canada would not have made building tar sands pipelines the center piece of its foreign policy.

The reality of an economic order built on white supremacy is the whispered subtext of our entire response to the climate crisis, and it badly needs to be dragged into the light. I recently had occasion to meet a leading Belgian meteorologist who makes a point of speaking about climate change in her weather reports. But, she told me, her viewers remain unmoved. “People here think that with global warming, the weather in Brussels will be more like Bordeaux—and they are happy about that.” On one level, that’s understandable, particularly as temperatures drop in northern countries. But global warming won’t just make Brussels more like Bordeaux, it will make Haiti more like Hades. And it’s not possible to be cheerful about the former without, at the very least, being actively indifferent to the latter.

The grossly unequal distribution of climate impacts is not some little-understood consequence of the failure to control carbon emissions. It is the result of a series of policy decisions the governments of wealthy countries have made—and continue to make—with full knowledge of the facts and in the face of strenuous objections.

Read the rest of the article at The Nation.