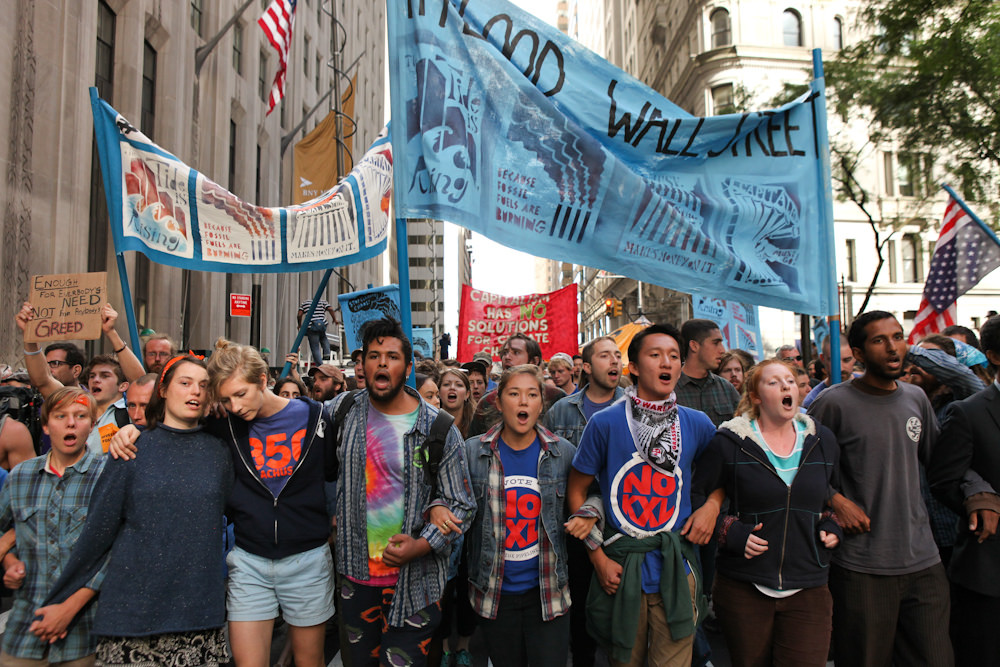 In the days since it stopped traffic in the heart of New York City’s financial district, Flood Wall Street has been noted for its Occupy style. FWS certainly shares some DNA with Occupy Wall Street, with links to the environmental and social justice group Rising Tide and others as well—but don’t be fooled. This is something different altogether.

So says Michael Premo, a New York-based activist and artist, and one of the key organizers behind the FWS action. He explains that it grew out of a call from the Climate Justice Alliance, a coalition of organizations supporting people on the front lines of the climate crisis, to initiate “nonviolent creative direct actions” during the United Nations climate summit this week. The planning conversations soon crystallized around the message of connecting climate change to capitalism’s endless drive for ever more profit and growth. But while Flood Wall Street now has a viral mission and many affiliations, Premo isn’t even quite sure what to call it. At least, he wouldn’t call it a movement.

“I don’t know what to call it at the moment,” Premo said. “I call it a response to the crisis.”

Several thousand people clad in watery blue joined in this response Monday morning at New York City’s Battery Park, the Statue of Liberty looming in the background. After speeches from several community leaders and authors, the mass proceeded with a 300 foot-banner and two enormous inflated “carbon bubble” balloons around the horns of Wall Street’s famed “Charging Bull” statue, where it settled for an all-day sit in. While the action started off with an air of peace, it ended up with pepper-sprayed activists and police violence, and 104 arrests.

As Flood Wall Street looks ahead from all that, it’s clear that its next concrete tactical steps are still in flux. Organizers and participating activists are hesitant to say for certain if and when there will be more sit-ins, if occupations or marches might be in store, or even where future actions might take place. But they’ve got a few ideas.

Maryam Adrangi, a supporting organizer with FWS as well as Rising Tide North America, said the message about the economic system’s position at the root of the climate crisis needs carrying out on multiple fronts.

“There’s a number of places I could see it going, not just to Wall Street,” Adrangi said. “Hopefully what we will see in future days is that people are actually taking some of the [targeting of those responsible for the crisis], and doing that in their communities.”

Meanwhile, Peter Rugh, a participant in Monday’s action and an organizer with the group System Change Not Climate Change, said that more broad, cross-cutting actions like Monday’s are sorely needed.

“There’s all kinds of local struggles, against pipelines, against uranium mining, against Arctic oil drilling. They’re all connected and people can recognize that,” Rugh said. “We’re also connected by an economic system, capitalism, that doesn’t value human beings or our environment. So, I think we have to keep engaging in the local struggles but also link up and fight around the bigger-picture issues.”

Premo says that a top priority for FWS is inspiring climate action “at the scale of global finance.” For example, he explains, this could mean pressuring big power players like Bill Gates and former New York mayor Michael Bloomberg to remove their billions from the fossil fuel economy by putting “bodies on the line” with civil disobedience. Business, civil society, and government all need to be involved, he added.

As some see it, there are considerable obstacles to address in order for FWS to achieve its goals. Nastaran Mohit, who stood among the crowd downtown, was concerned about the lack of people of color and members of so-called “frontline” communities – the places hit hardest by climate impacts. Mohit, an activist and organizer who has spent considerable time in Hurricane Sandy-ravaged communities in the Rockaways, said there is difficult work to be done connecting FWS’ important political message to the needs of the people most impacted by the climate and inequality crises.

“The devastation wrought on those communites by a climate catastrophe is real and almost two years after the storm they’re still suffering,” Mohit said among the banging of drums and chants on Monday. In New York, we should be involving those people in the building and planning of responses like Flood Wall Street, she added. “But they’ve been forgotten. So it is imperative that as a movement we’re not forgetting about those folks.”

Premo said that FWS planning took place in open meetings that anyone could join, but he acknowledged that involving marginalized communities remains a major aim.

“In a lot of ways it’s learning the lessons from Occupy to root the response to this, to make it more accountable to people on the frontlines,” Premo said. He added: “We can always do better to include communities, and more communities.”

Some have favorably compared the radical mission of FWS to the People’s Climate March that took place a day earlier, drawing around 400,000 people to the streets of New York for what would become the largest climate action in history. The march was backed by mainstream NGOs and did not make specific demands. But Premo said that when it comes to building a cohesive movement to save the climate, we would be wise to take a lesson from the planet itself.

“Often our movements are constrained by very traditional Western notions of either ‘this’ or ‘that,’ or ‘and’ or ‘or,’” Premo says. “We need to be able to embrace that we can have both, and that we need both. To really advance meaningful social evolution we need a movement ecosystem as vibrant and dynamic as the natural world we’re fighting to protect.”

“I actually think people are ready to be talking about the role that markets play in climate change,” she said. “We just need to popularize it.”

Alexandra Tempus is an independent journalist and was a lead researcher on This Changes Everything. She is also a researcher at Rolling Stone and has written on climate and politics for VICE News, Mic, the Associated Press and The Nation.