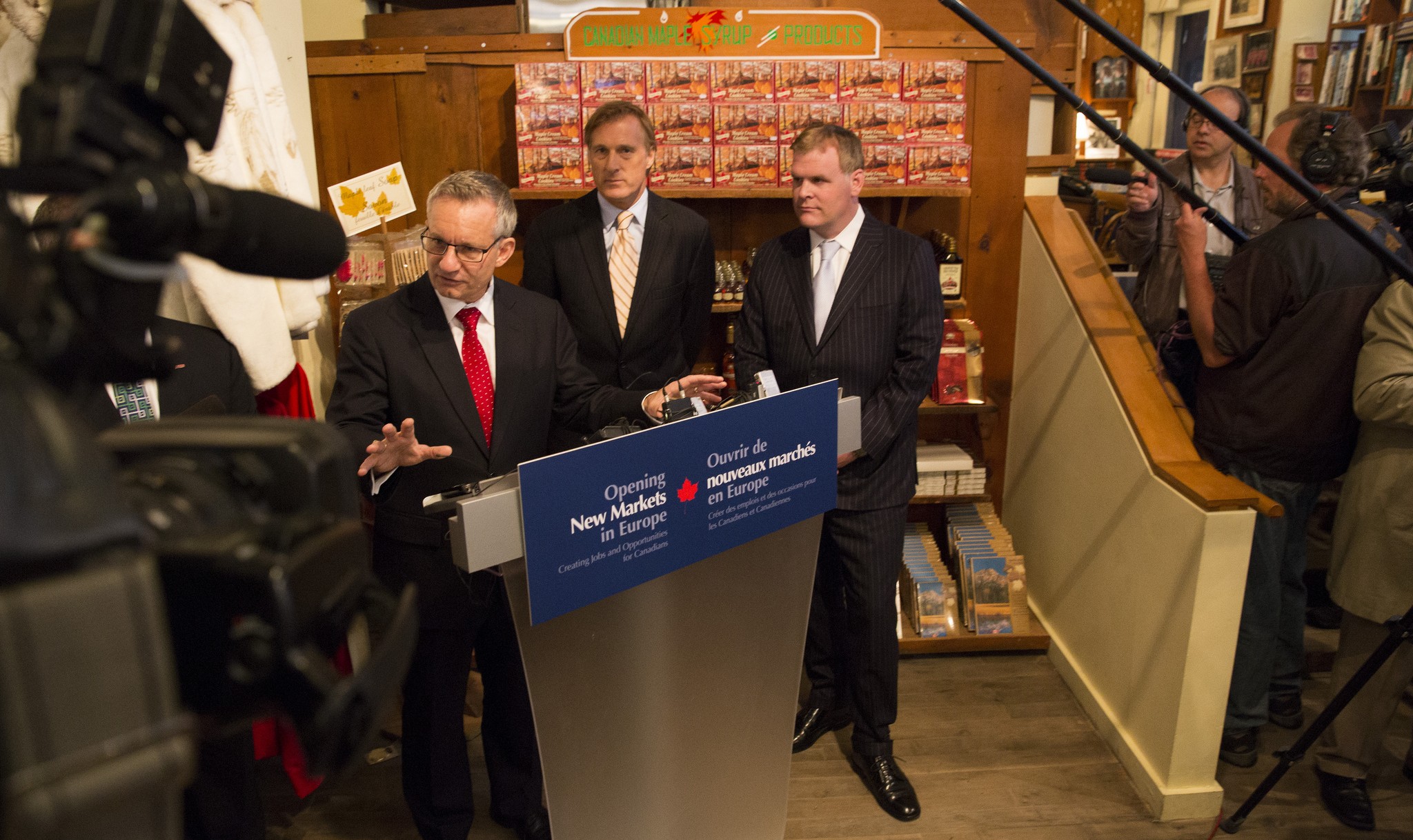 15 European and Canadian organizations are warning that a new Canada-EU trade deal, called the Comprehensive Economic and Trade Agreement (CETA), could expose Canada and Europe to a wave of corporate lawsuits that would restrict governments’ power to regulate in the public interest—including in confronting climate change. The text of the agreement was finalized in September, and will be discussed by the EU Council of Trade Ministers on November 21st as public anger rises over its potential impact.

The new report from civil society groups, “Trading Away Democracy,” picks up on issues outlined in Naomi Klein’s This Changes Everything, which compellingly exposed how international trade rules often end up undermining domestic climate change legislation. Klein tells the powerful and disturbing story of mounting World Trade Organization challenges to renewable energy programs in Canada, Europe, India, and China. National efforts to regulate fossil fuel extraction are also increasingly vulnerable. These corporate attacks on democracy are all made possible by “free” trade agreements ratified in the last two decades—and in particular by the way they established investor-state dispute mechanisms, in effect privatized tribunals, that allow corporations to directly sue governments for any measures taken that are seen as unjustly affecting their profits.

As Klein notes, “To allow arcane trade law, which has been negotiated with scant public scrutiny, to have this kind of power over an issue so critical to humanity’s future is a special kind of madness.”

Unfortunately the evidence suggests we are plunging into new depths of madness rather than seeking a mindful way out. CETA’s rules go beyond those established by the North American Free Trade Agreement (NAFTA), which U.S. and Mexican corporations have used to launch 35 suits against Canada—many still unresolved. Canada has already paid out more than C$170 million in damages, as well as millions of dollars in legal fees. Cases worth several billion more are stacking up.

Now CETA is opening up the door to suits from European corporations—which have launched more than half of all investor-state challenges globally—as well as back-door challenges from American or Canadian companies hiding behind European subsidiaries. CETA’s expansive new provisions in the financial services sector in particular opens up Canadian regulations to attack, especially in light of extensive European investment in Canada’s finance and insurance industries. This threatens the safeguards that protect consumers and that sheltered Canada’s banking system during the recent global financial crisis.

At the same time, Europe is most likely to feel the pressure from Canada’s powerful oil and gas and mining corporations. The extractives sector is one of the largest sources of investor-state disputes, and Canada is already involved in a number of controversial mining projects in Bulgaria, Finland, Ireland, Romania, Greece, and Spain. As a result of Canadian government pressure, the EU has already watered down legislation that would have punished companies for importing higher-carbon fuels derived from the Alberta tar sands. Thanks to its incorporation in the US tax haven of Delaware, Calgary-based Lone Pine Resources Inc. has already used NAFTA to attack a fracking moratorium in Quebec, and the industry is sure to take a similar approach to other European moves to leave shale gas in the ground. It is no surprise that extractive interests are celebrating CETA as a “landmark” agreement which could have “major implications for miners.”

CETA is dangerous not only because of its endorsement of controversial investor rights. The entire deal favors corporations over citizens. Through extended patent protection for prescription drugs, drug costs will explode. The agreement will also pry open Canada’s municipal procurement market—the purchase of goods and services by local government agencies—for the benefit of European multinationals. It’s all about boosting corporate profits, with only public losses.

The good news is that while European and Canadian representatives want to present CETA as a done deal, opposition to investor protections is growing, particularly in Europe. Although it has been initially signed, ratification of the deal will require approval by the EU parliament as well as all the national parliaments of member countries, and therefore will not happen for at least 18 months. Meanwhile, public awareness of these deals is growing and causing trade ministers to become increasingly defensive. A proposed EU-US trade deal has received almost 1 million signatures in Europe calling for its revocation, more and more parliamentarians are speaking out, and even usually sympathetic, pro-corporate policymakers and media voices are calling for a rethink.

The door is open for a change of course if we push hard enough. The stability of our climate depends on it.

Nick Buxton is a communications consultant with the Transnational Institute, one of the 15 Canadian and European groups behind the new report. Read it here.

Photograph by the Canadian Department of Foreign Affairs, Trade and Development.