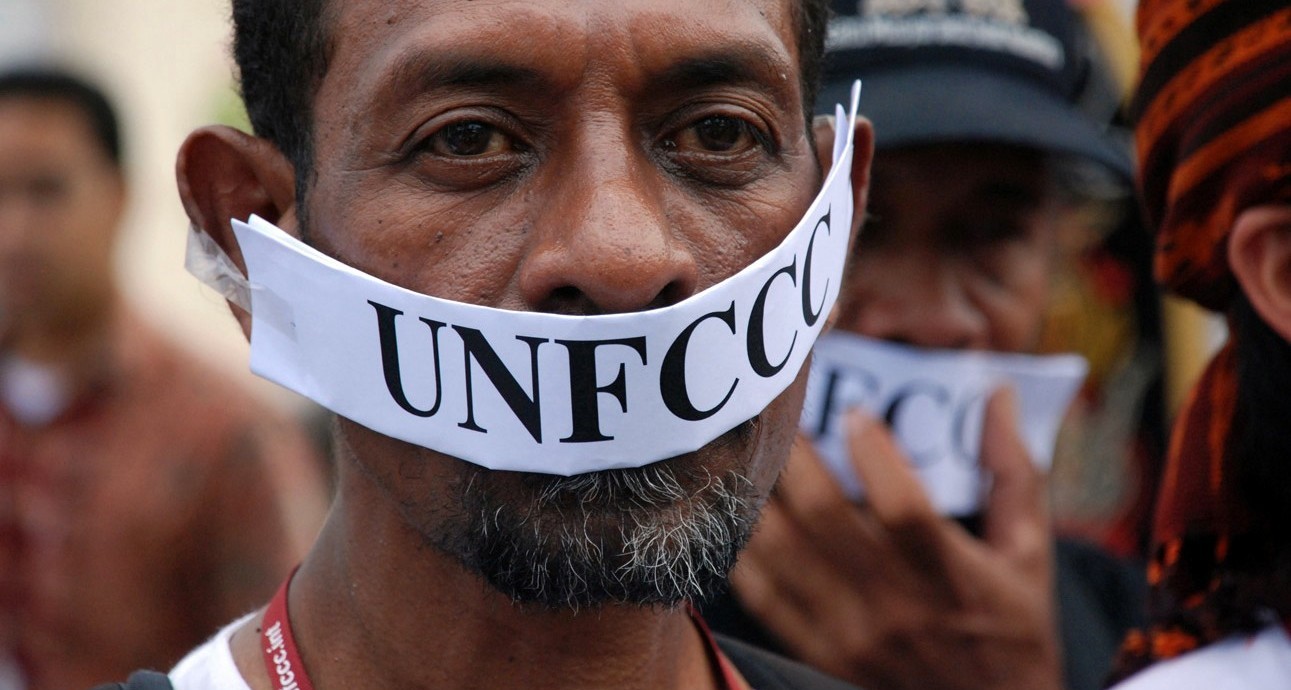 It’s a milestone of sorts. This week, national leaders are gathered in Lima, Peru for the UN climate treaty talks—the 20th Conference of the Parties (COP20). For two decades, the international community has attempted to advance meaningful policies through the U.N. Framework Convention on Climate Change (UNFCCC) to save our planet from impending climate disaster.

And for two decades, the talks have failed. Why?

The intricacies of treaty talks are undeniably complex: a delicate balance of political maneuvering and consensus-building among government delegates with sometimes wildly divergent national priorities. But also undeniable is the presence and the power of the fossil fuel industry effectively thwarting these talks.

If we want meaningful climate action—a strong international framework that responds effectively to the climate crisis and spurs bold domestic policies around the world—we must remove the proverbial fox from the henhouse.

The very oil, coal, and gas giants that have brought us to the brink of catastrophe are not just at the negotiating table—they are coming dangerously close to running the show. Examples of Big Energy’s influence in the talks abound: from corporations actually sponsoring the last round of talks (COP19), to industry front groups like the World Coal Association and IPIECA (the International Petroleum Industry Environmental Conservation Association) gaining official status, to solutions on the table that seek to enrich the private sector above all else.

Given that kind of encroachment, removing the energy industry from the talks may sound impossible. But recent history offers a hopeful roadmap for getting it done.

The story of how Big Tobacco sought—and failed—to undermine the World Health Organization’s Framework Convention on Tobacco (FCTC) is the stuff of legends (well, at least in the international public health world). It’s a story of courageous leaders standing up to a behemoth industry and the rich countries of the Global North in its pocket. It’s a story that testifies to the power of global grassroots organizing. And it’s a story that demonstrates how effective an international treaty can be when it prioritizes the lives and wellbeing of people everywhere over the interests of transnational corporations.

At the outset of the FCTC negotiations in the 1990s, Big Tobacco was driving an epidemic that claimed more than 5 million lives annually. With stronger tobacco control laws on the books in U.S. states, the industry was desperate to rapidly expand to new markets (read: targeting youth, women, and low-income communities) in the Global South. An international treaty on tobacco would put a serious damper on its efforts, not to mention its profits. So it pulled out all the stops to prevent that from happening.

And it had a lot of stops at its disposal.

The industry was well represented early in the negotiations. It had powerful allies in the US, German, and Japanese government delegations—countries where the tobacco industry held major interests. For example, Japan Tobacco, one of the three largest tobacco corporations in the world, was owned in large part by the Japanese government (whose stake was more than 60 percent). A number of participants like China had large, state-owned tobacco corporations that were actually directly represented on national delegations. Furthermore, the industry’s top front group, the International Tobacco Growers Association (ITGA), attempted to position itself as protecting the interests of low-income Global South farmers in order to attack and derail treaty progress.

During the negotiations, delegations representing and protecting Big Tobacco’s interests did everything in their power to weaken the agreement. The most powerful and vocal force was the US delegation, acting under the Bush administration. Examples abound of how the US worked to advance the tobacco industry’s interests. In fact, in November 2001, U.S. Representative Henry Waxman sent an open letter to President Bush showing that the US was supporting ten out of the eleven deletions to the FCTC text recommended by Philip Morris. A week before the final negotiations meeting in 2003, the Bush administration also sent a letter to Saudi Arabia, asking for its help to weaken the treaty. Finally, the U.S. delegation tried to insist that countries could reserve the right to opt out of any FCTC provision—which would have essentially rendered the agreement useless.

But there were also delegates—public health ministers and other officials—who understood the tobacco industry was wreaking havoc in their countries. They were determined to reverse the entirely preventable epidemic of death and disease that was being driven by Big Tobacco.

A strong contingent of civil society groups—including the Network for Accountability of Tobacco Transnationals (NATT), a South-North coalition that was co-founded by Corporate Accountability International—worked closely with these delegates to stand up to Big Tobacco.

And so, despite tremendous industry pressure, governments of the Pacific Islands, Southeast Asia, and Africa led the way to a treaty that was a victory for public health and corporate accountability. They faced down Big Tobacco because they simply could not relinquish the opportunity to secure a powerful tool that would save millions of lives. Supported by strong grassroots organizing, and against all odds, they won.

When the treaty was unanimously adopted in 2003, it included the now legendary Article 5.3. This section of the text identifies the tobacco industry’s fundamental and irreconcilable conflict of interest when it comes to public health policy. Arguably the backbone of the FCTC, Article 5.3 enshrines into international law the principle that the tobacco industry has no role in public policymaking. “In setting and implementing their public health policies with respect to tobacco control,” the provision states, “Parties shall act to protect these policies from commercial and other vested interests of the tobacco industry in accordance with national law.”

Its guidelines assist countries in implementing rules in line with that principle. The Article 5.3 guidelines derive directly from, and are meant to be a bulwark against, the tactics Big Tobacco uses to corrupt public health policy—and they include limiting government interactions with industry, rejecting corporate partnerships, and implementing transparency measures.

And Article 5.3 is working. Governments from the Philippines to Colombia have used this international law to prevent the industry from having a seat at the table when crafting tobacco control policies. As a result, Article 5.3 is speeding up the passage of domestic laws that save lives the world over, such as in Australia, where tobacco products are now sold in plain packaging—without any branding.

Industry not a legitimate “stakeholder”

From the beginning of the FCTC negotiations, there was a high degree of skepticism and resistance to the idea of protecting the treaty talks from the industry. Some governments and NGOs argued that excluding Big Tobacco, which claimed to be a stakeholder, would derail the process.

But in fact, it was the opposite. The FCTC became the most quickly ratified United Nations treaty in history, and currently has 179 Parties. It will save more than 200 million lives when it is fully implemented.

Today, the same arguments are being made to legitimize Big Energy as a stakeholder at the climate negotiations. But the reasons for protecting the talks from industry influence are also the same—and the stakes are even higher.

The power of the fossil fuel industry is admittedly mightier and more entrenched than that of the tobacco industry. But as Naomi Klein argues in This Changes Everything, we must embrace radical change and boldly rein in corporate power if we are going to find real solutions to the climate crisis—on the local, national, and international levels.

We must be bold and determined

No doubt this year’s climate talks in Peru will be just as vulnerable to corporate capture, if not more so, than last year’s. But there will be an even larger group of people determined to safeguard the negotiations from Big Energy—with the precedent of FCTC’s Article 5.3 as a powerful tool at their disposal.

Learning from the success of the FCTC, we know what it will take:

It will require a strong coalition of civil society groups supporting and organizing courageous government leaders who represent the people on the frontlines of climate change.

It will require global grassroots mobilization to build the political will to kick Big Energy out of the climate talks, and to have the backs of delegates who stand up to fierce industry pressure.

It will require making strategic decisions to advance the right policies at the right time and being ever vigilant to the threat of watered-down alternatives advanced by fossil fuel interests.

It will require steadfast commitment, grim determination, and clear-eyed dedication to the process and its end goal.

We have history on our side and incredibly high stakes to propel us forward. We have no time to waste.

Patti Lynn is the managing director of Corporate Accountability International, a member-powered organization that protects human rights, public health, and the environment from corporate abuse around the world. As a core organizer on the FCTC process, she worked closely with NATT and Global South delegates during the negotiation, adoption, and ratification of the treaty.