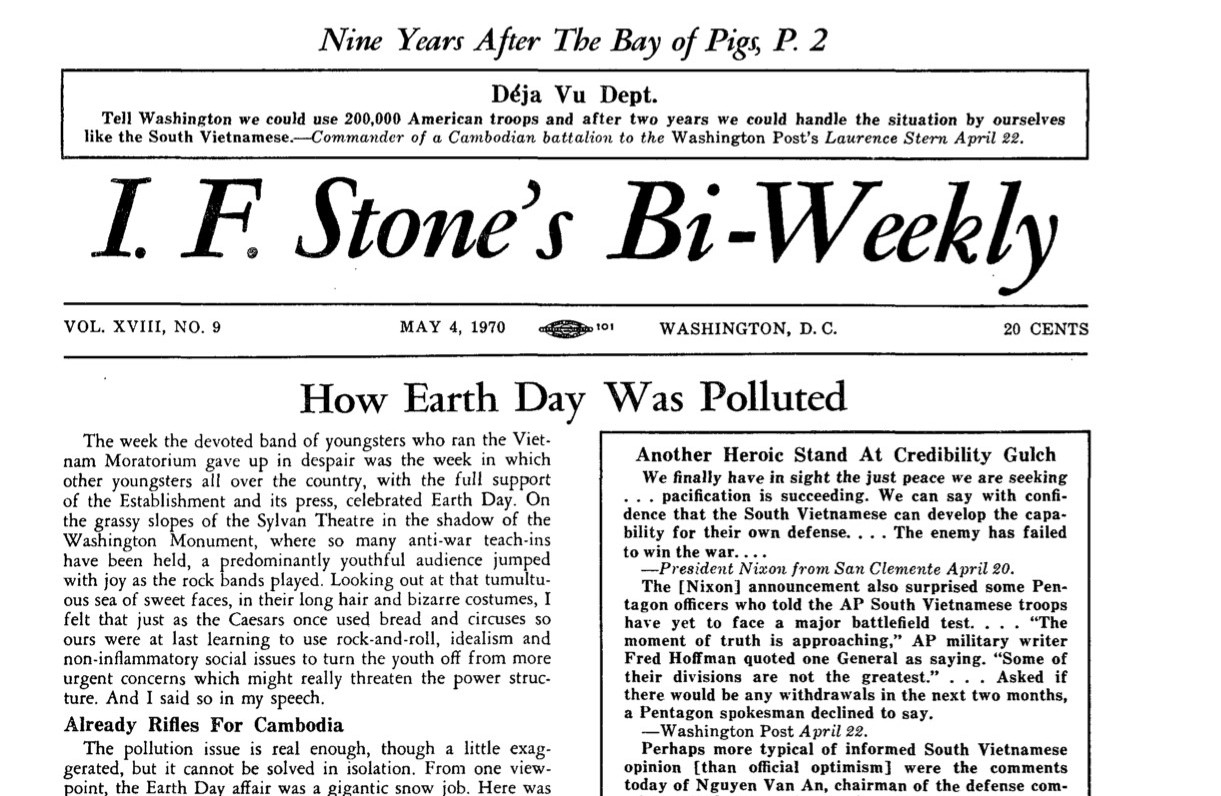 One week ago, I was honoured to receive an “Izzy Award” for “outstanding achievement in independent media and journalism.” The annual award, which this year also went to David Sirota for his groundbreaking investigations into political corruption in the U.S. pension system, is named after the great muckraker I.F. Stone (“Izzy” to his friends).

In past years, the award has gone to people who do a far better job of embodying the legacy of Stone’s investigative reporting than I (Glenn Greenwald and Jeremy Scahill among them). But as I said at the ceremony at Ithaca College, I doubt the judges have given the honour to anyone whose grandparents would have been more thrilled. Without fail, my late grandfather Philip Klein would read I.F. 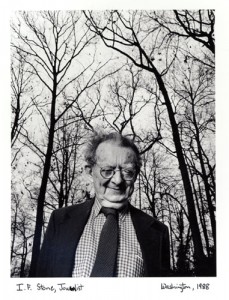 Stone’s Weekly to my late grandmother Annie while she knitted some new creation.

In preparation for the ceremony, I read some of Stone’s environmental writing, and came across a piece that seems very worth sharing today. It’s the speech he gave on April 22, 1970—the very first Earth Day. Never one to mince words, Stone’s speech was titled “Con Games.”

Picture the scene: it’s the Sylvan Theater on the grounds of the National Monument in Washington, D.C. Millions have participated in Earth Day events across the country and thousands are now gathered on the National Mall to listen to music (including Pete Seeger and Phil Ochs) and hear rally speeches from political heavyweights.

It is in this joyous and self-congratulatory atmosphere that a curmudgeonly I.F. Stone, by now a full-fledged icon on the left, takes the stage. And he unapologetically rains on the parade, accusing Earth Day of providing cover for escalating war and calling for a movement willing to demand “enormous changes—psychological, military, and bureaucratic—to end the existing world system, a system of hatred, of anarchy, of murder, of war and pollution.”

Not everything about the speech stands the test of time (as we now know, the threats posed by pollution are far more dire than mere “litter”). But what Stone saw clearly, and what bears repeating four and half decades later, is that the ecological movement will get nowhere if it fails to connect the dots with other overlapping crises facing our society, from racism to militarism to inequality. Stone wasn’t saying that pollution was irrelevant—simply that it “is not going to be solved in isolation.”

Amen to that. So on this Earth Day, let’s hear it for Izzy, and for all the others willing to crash the most comfortable parties.

In the ancient world, the Caesars did it with bread and circuses. And tonight, I’m afraid, is the first time that our Caesars have learned to do it with rock and roll, and idealism, and noninflammatory social issues. In some ways, I’m sorry to say, we here tonight are being conned. This has many of the aspects of a beautiful snow job. The country is slipping into a wider war in southeast Asia, and we’re talking about litterbugs. The secretary of defense, on Monday, made a speech to the Associated Press sabotaging the SALT talks, presenting a completely false picture of the world balance of power, ending what little hope we had of progress in those talks, preparing the way for a bigger, more expensive arms race at the expensive of mankind, and we’re talking as if we needed more wastebaskets.

The divisions of white and black in this country are getting to the point where they threaten our future, and we’re talking about pollution. And it’s not that pollution is not an important subject, but if the Nixon administration feels so deeply about it, why don’t they do something substantial about it?

One important thing about this town is that you can never take very seriously what the officials say. They’re the prisoners of a vast bureaucracy. Much of what they say is merely rationalization of their lack of momentum. But in particular, the president said, and I think quite rightfully and quite truthfully, that in the next ten years it’s now or never for the air we breathe and the water we drink. And then, after making that speech, he put in a budget in which 52 cents out of every general revenue dollar goes to the military, and barely four-tenths of one cent goes to air and water pollution. And that’s a real con game. And that’s a real snow job.

We are spending, on new weapons systems alone, more than ten times as much, in this coming fiscal year, in the Nixon budget, than we’re going to spend on air and water. We’re spending a billion dollars more a year on space than all our expenditure on natural resources. The priorities of this government are lunatic—absolutely lunatic. And we’re not going to save the air we breathe and the water we drink without very many fundamental changes in governmental policy and governmental structure.

Before I came down here tonight, I heard a TV announcer say with great satisfaction that he hadn’t heard a word said about Vietnam all day. Well, I’m going to say a word about Vietnam. We’re not going to be able to save our air and our water, and the resources of our country, for our children and our grandchildren, until we end the militarization of our society, until we bring to an end the effort of American imperialism to rule the world and to waste our resources and our honor and our kids on a futile and murderous and insane task.

The problem of pollution is not going to be solved in isolation. The basic and most important pollution problem that we have to deal with is to prevent the pollution of the atmosphere of free discussion by the Nixon-Agnew-Mitchell administration. A society can only progress and deal with its evils if it is prepared to allow the widest measure of free speech, including free speech for radicals who are completely opposed to the basis of that society. Any society allows you to agree with the government. A free society allows you to disagree fundamentally. And it takes a lot of disagreement, and a lot of hollering and a lot of demonstration, to shake any establishment out of its accustomed ways. And the main menace to the solution of these problems is an administration that thinks they will go away if they just put a few radicals in jail.

The problems are enormous. The source of pollution is man. And man’s technology. And the enormous institutions he has built up that make him a prisoner. And somehow we’ve got to shake loose. And the biggest menace—the institution that ties us down most—that wastes our substance—that threatens to waste more of our youth—is that great big, five-sided building across the Potomac—the Pentagon. They are preparing to do to us at home what they tried to do in Vietnam.

Only this week, General Wheeler, the retiring chairman of the joint chiefs of staff, gave an interview to U.S. News and World Report in which he said that criticism of the military was due to a Communist plot. This is an effort of the military to revive McCarthyism, to preserve its enormous power and privileges in our society. And until its power is broken, until the military is reduced sharply in size, we’re not going to be able to solve these problems.

You know, there is no use talking about Earth Day unless we are prepared to make these fundamental changes. Everybody’s talking about Earth Day, and it comes out of the mouths of so many hypocrites it turns your stomach. What kind of an Earth Day can we celebrate in a country that is spending so much of its money to destroy the Earth? How can we talk of reverence for life when we’re spending so much on our enemy, our genius, our money, and our youth on building up new means of destroying life?

What’s the use of talking about the pollution of air and water when we live under a precarious balance of terror which can, in an hour’s time, make the entire Northern Hemisphere of our planet unlivable? There’s no use talking about Earth Day until we begin to think like Earthmen. Not as Americans and Russians, not as blacks and whites, not as Jews and Arabs, but as fellow travelers on a tiny planet in an infinite universe. All that we can muster of kindness, of compassion, of patience, of thoughtfulness, is necessary if this tiny planet of ours is not to go down to destruction. Until we have a leadership willing to make the enormous changes—psychological, military, and bureaucratic—to end the existing world system, a system of hatred, of anarchy, of murder, of war and pollution, there is no use talking about buying more wastebaskets or spending a couple of hundred million dollars on the Missouri River. If we do not challenge these fundamental causes of peril, we will be conned by the establishment while basic decisions are being made over which we have very little control, though they endanger everything on which our future and the world’s depend.