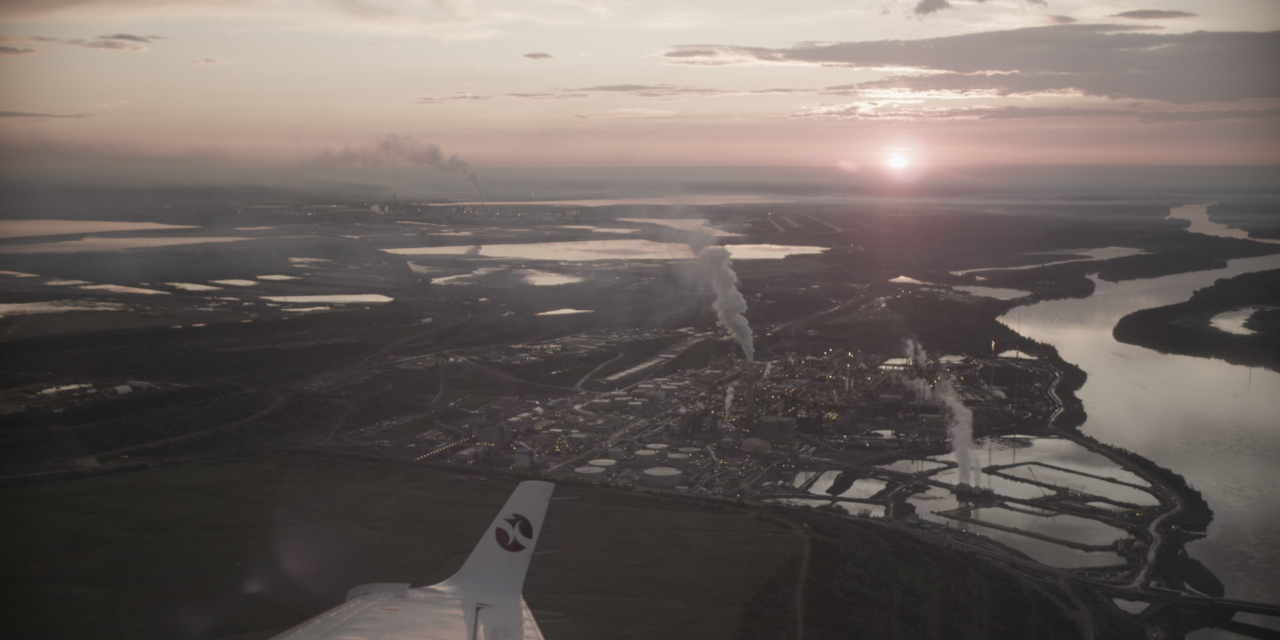 It would be hard to invent a more destructive ritual of national self-punishment. Year after year, we hand oil companies gigantic tracts of pristine land. They skin them of entire ecosystems. They vacuum billions of dollars out of the country. Their oversized power, sunk into lobbying and litigation, upends government law-making.

And Canada’s return? The exploitation of the tar sands provides just two percent of our GDP. It has gutted manufacturing jobs and made a mockery of our emissions targets. And now that oil prices are crashing—as resource commodities predictably do—it is putting a vicious squeeze on government spending.

Faced with similar recklessness, people in other countries are setting out to take back control of their energy. As Naomi Klein documents in her new book This Changes Everything, it hasn’t been driven by ideological fervor. Towns like Boulder, Colorado, concerned by the threat of climate change, have started demanding a clean, renewable alternative from their energy providers. They are then discovering that private utility companies simply refuse to provide it.

The experience is forcing a reckoning with an economic myth that has gripped global politics for the last thirty years: that private companies better serve our needs than public institutions. In fact, private utility and oil companies—like all large corporations—are legally designed to look after only a single need: the maximization of their profits.

That’s meant other needs—the provision of renewable energy, for instance, or ensuring the economy doesn’t tank the planet—fall by the wayside. They don’t offer the prospect of massive profits. Realizing this, waves of citizens in Germany and towns like Boulder are voting in referendums to return private utilities to public hands. That spirit—along with the idea of the nationalization of the oil industry—should rapidly return to Canada.

Some will insist that nationalizing Canada’s oil industry is a fringe, radical idea. But half of Canadians already support it, according to one survey. That’s despite decades of relentless misinformation about the supposed perils of government regulating or running business. Even in the province that is home to the tar sands, more than one in three favored the idea. Beware of your neighbors, Albertans: they’re harboring closet nationalizers.

Canadians value that their hospitals, schools, transit, and libraries are run in the public interest. So why not our energy? Sure, the old style of nationalized companies—centralized, bureaucratic and often corrupt—is easy to criticize.

But this could be an opportunity to reinvent nationalization—creating non-profits owned by all levels of government or by co-operatives that millions of Canadians are already members of, committed to easing us off oil rather than selling us every last drop. These entities wouldn’t be run by CEOs accountable only to share-holders, or by bureaucrats accountable only to politicians: they would involve diverse boards with elected representatives of workers, consumers, and First Nations.

They could hardly squander Canada’s wealth more than those now running the industry. While oil companies have become the richest corporations in history, both federal and provincial governments have settled for capturing single-digit rents and taxes. An Alberta bumper sticker from the 1980s summed up this approach: “Please God, let there be another oil boom. I promise not to piss it all away next time.” But piss it away they have.

Take as a contrast Norway. A majority owner of Statoil, it has retained most of its oil revenue. A pension fund ensuring future savings for its citizens contains almost a trillion dollars—that’s nearly $200,000 per person. Alberta has produced twice as much oil; its fund, meanwhile, has been pilfered by its governments and holds a paltry $18 billion. Nationalization would be a way to finally put our hands on oil money and start directing the earnings toward something useful: like investment in renewable energy and green infrastructure.

Legally redesigned not to seek profit as their basic motive, public interest oil companies would also behave differently: they’d improve employment standards; reduce and eventually halt new exploration and production; and stop enlisting police to criminalize Indigenous peoples and those standing in the way of unwanted projects and pipelines. Other forms of corporate subversion and distraction—funding for climate change denial or battalions of spin-masters—would be abandoned.

A public mandate would ensure that oil companies end their hunt for the highest international price, when Canada remains the only industrialized country without an emergency reserve for its residents. They’d encourage conservation, rather than stoking consumption. As we hit the earth’s ecological limits, the oil we burn should be saved for only the most essential needs—used carefully, not carelessly.

Most importantly, public interest oil companies could initiate a transition to a more diverse, balanced economy. Even Alberta’s finance minister seems on board: “we have to get off the oil train,” he acknowledged last week. The industry would boost investment in the renewable sector—which, as much as Canada’s government hates for you to know, creates seven to eight times more jobs than similar investments in the oil sector. And they would ultimately convert themselves into different sort of companies: instead of drilling wells or laying pipes, their workers would assemble solar panels and rig up wind turbines.

Previous steps to take greater control of the industry in the 1970s—like Pierre Elliott Trudeau’s creation of government-owned Petro-Canada, and then soon after, the National Energy Program—have been caricatured and ridiculed by oil companies, governments and right-wing media alike. But these policies, riding a wave of economic nationalism, were supported at first by 84 percent of Canadians, including a majority of Albertans.

They had many benefits, says Gordon Laxer, an emeritus professor of political economy at the University of Alberta and author of an upcoming book on Canadian energy and ecological security. They greatly reduced Canada’s imports and exports of oil, helped capture more revenue, and even helped with conservation. Trudeau, however, made a mistake that opened up the program to attack: he angered western Canadians by trying to take over the province’s control over resources.

“Opponents were hysterical. They raged about the “East’s” plan to steal Alberta’s resources. They dubbed the Calgary headquarters of Petro-Canada ‘Red Square.’ They were out to kill the National Energy Program, to which they falsely pinned Alberta’s devastating downturn, which happened as deeply in all oil producing regions in the world. The spin has stuck to this day.”

Trudeau was in fact on the right track—he just didn’t go far enough. Under fuller, more democratic public interest control of oil both Albertans and other Canadians would receive far more benefits than any of them gain now. The threat of a real heist has never come from Ottawa. It’s come from private oil companies thieving all along.

The way to change this, Laxer argues, is not by immediately buying out oil companies: it should start with environmental policies that cap production of tar sands, increase royalties and corporate taxes, and abandon pro-corporate trade pacts like NAFTA that undermine government decision-making.

“A tough regulatory plan would drive down oil companies’ take. They’d be forced to pay the full cost of dumping waste into the air, which they do now for free. And once their stock value goes down, you could an buy them up at fire-sale prices if you wanted to, and use their revenue for renewable energy and energy conservation.”

None of this will be easy. But as climate change and weather disasters fueled by oil companies’ pollution hit with increasing severity, ever more people will be open to the idea. Canada’s oil corporations have made a profitable mess of the country: it’s long-past time to put them under public, democratic control.

A shorter version of this article originally appeared at The Guardian on December 3.