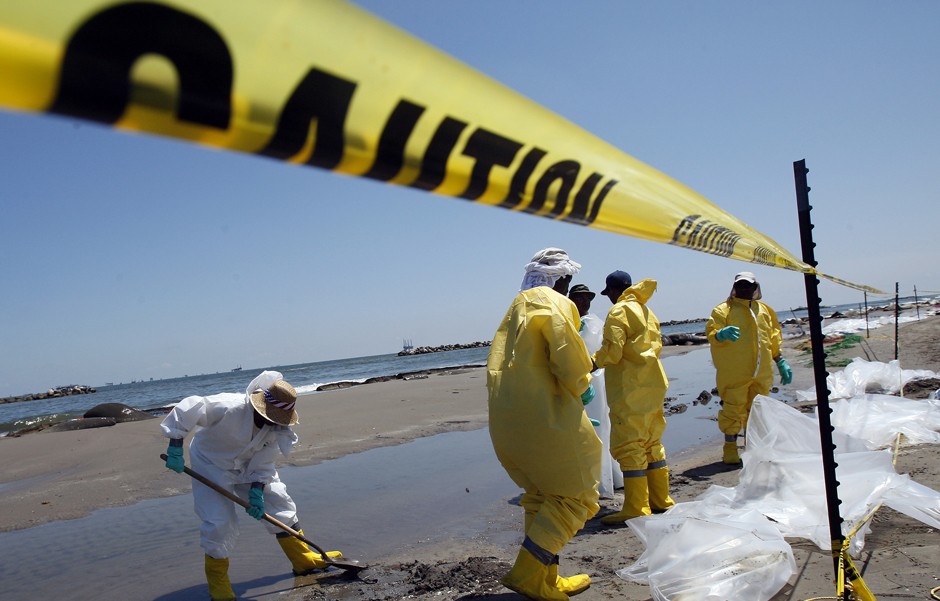 The climate crisis often presents us with postcards from our possible futures. In a brilliant investigation last October for BuzzFeed, Amanda Chicago Lewis told the story of prisoners in California who are being used to combat the out-of-control wildfires that have gripped the state over the course of the last year, and paid a fraction of the minimum wage. Lewis tells the story of Demetrius Barr, a nonviolent drug offender who expresses complex emotions about his circumstances. On the one hand, he describes the firefighting work as a chance to escape the dehumanizing confinement and restricted motion of an indoor prison. On the other hand, he was earning less than $2.00 a day and compared the exploitative economics of his situation to slavery (a comparison, Lewis notes, that is common among prisoners working in the California brush).

Reading this account, I was uncomfortably reminded of my visit to Louisiana in the summer of 2010, when I was preparing an article on the BP Deepwater Horizon explosion. Near the shore, the humid southern air was completely saturated with the smell of oil. Rows of sweaty, unsmiling workers in identical uniforms—who were nearly all Black, as far as I could see—were laying down barriers along the shoreline, resembling the barracks of an ecological trench war. They were sub-sub-subcontractors who had been hired to clean up the spill, recruited from parish prisons and for-profit incarceration centers across the state.

In 2010, we witnessed prison labor being used to mitigate the inevitable disasters that accompany the energy industry’s mad rush to exploit the most extreme resources; now, in California, we are witnessing prison labor being advanced as a solution to the climate chaos that fossil fuels inevitably produce.

For those of us lucky enough not to be affected directly, these spectacles, these postcards from a possible future, produce a feeling of horror that is greater than the sum of its parts.

What vision of the future does the American prison system represent? Most fundamentally, it is one based on the systemic oppression of people of color. In her groundbreaking book The New Jim Crow, law professor Michelle Alexander explains how the war on drugs—which supplies the prison system with half of its prisoners—grew out of a racist strategy to secure working-class white votes. Alexander points out that Reagan’s war on drugs actually preceded the outbreak of crack cocaine, and represented the apotheosis of a Republican effort to paint Black people as criminal “others”: “The war on drugs, cloaked in race-neutral language, offered whites opposed to racial reform a unique opportunity to express their hostility toward Blacks and Black progress, without being exposed to the charge of racism.”

This strategy worked to devastating effect—today, an African-American man is six times more likely to be incarcerated than a white man despite using and selling drugs at roughly equal rates. This has led many thinkers like Alexander, along with activist groups like Critical Resistance, to emphasize that the American prison system functions primarily as a tool of racial and economic control. Indeed, it both requires and reinforces American racism—by profiting from the notion that black and brown bodies inherently deserve incarceration (manifested in draconian detention and sentencing practices by police and judges, which The New Jim Crow documents at length), and by ripping apart the economic and social fabric of Black communities and thereby creating the conditions of “danger” and “lawlessness” that so terrify white Americans in the first place.

The prison industrial complex thereby helps to prop up the ideology that allows us to accept the slow-moving, global disaster of climate change—a disaster that will most drastically impact the poor and communities of color around the world. Simply put, working for real and viable climate solutions means addressing structural racism and exploitation. Alicia Garza, cofounder of the #BlackLivesMatter movement, explains this principle elegantly: “When black people get free, everybody gets free.”  The climate movement, therefore, has an obligation to directly challenge the vision of the future represented by the prison system, both as an insidious instrument of the racism and exploitation that threatens all of us and as a mammoth humanitarian disaster in its own right.

This is the time to do so. The prison industrial complex depends on a perpetual stream of black and brown prisoners, which in turn depends on racist, militarized, and unaccountable policing; the machinery of this system has been increasingly exposed as the authorities fail again and again to indict police murderers of people of color. In New York City, where I live, climate activists from a range of organizations and ideologies are taking to the streets alongside hundreds of thousands of others who are outraged over the murders of Michael Brown, Eric Garner, Nizah Morris and far too many others. Over the last few months we have been lucky to have many voices explaining WHY climate activists must stand in solidarity with those protesting police murders. HOW is a question with many answers, but one that many are already addressing, and that will continue to be tackled in a variety of ways as these protests continue (recognizing the historically white composition of the mainstream environmental movement as a whole, I’d be remiss if I didn’t mention Bay Area Solidarity Action Team’s protocols for white supporters as an important part of exploring these answers).

As with the struggle against climate change, fighting the prison industrial complex involves taking on powerful economic interests. The Corrections Corporation and the GEO Group, the two largest private prison companies in the US, made 3.3 billion dollars in revenue in 2012 alone—and a range of other actors profit from cheap prison labor, which represents an attractive resource for those looking to avoid pesky things like unions and minimum wage requirements and is increasingly the solution of choice for American companies such as Walmart. Rather than create jobs for poor communities, which might hinder the accumulation of capital or shift power to the working class, these interests are pursuing a vision of society that would see disadvantaged individuals cycled through prisons, their labor severed from any economic or political costs.

This is the vision we have seen in fragments in Louisiana and California, one in which white supremacy and economic oppression reinforce each other in a closed, endless loop.

There is an alternative vision of our future behind the climate fight, and it is wholly incompatible with the prison industrial complex. As Stanford’s Mark Jacobson has outlined, we could power the world on 100% renewable energy within a few decades, but to do so would essentially require a global public works program unprecedented in human history. In other words, it would entail putting huge numbers of people to work, and rejecting the doctrine of futility that characterizes our current approach to both the climate crisis and unemployment. Such a “Marshall Plan for the Earth” would build not only the labor power but also the political power of the poor and communities of color—the very constituents currently being oppressed by the prison system, and on whose disenfranchisement its continued expansion depends. Both justice and survival demand that we make this vision a reality.

Patrick Robbins is a writer, researcher and activist based in Brooklyn. He is currently working with Sane Energy Project toward the goal of an entirely renewable New York, and was an active member of Occupy The Pipeline from 2012 to 2014.