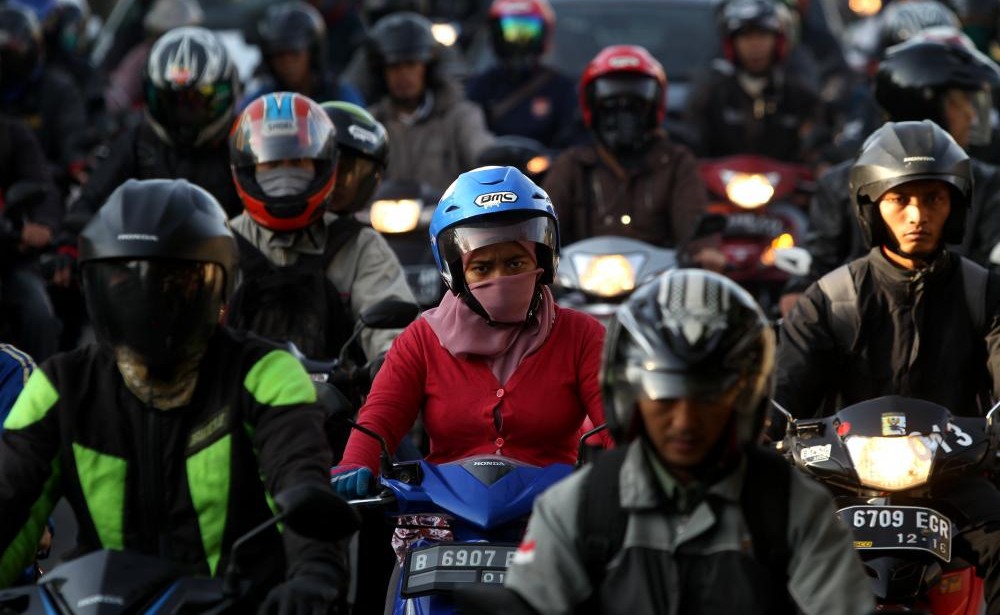 I was traveling through a typically crowded street in Jakarta on the back of a motorbike recently, breathing the usual noxious stench of exhaust fumes, when I was struck by a powerful realization about the climate crisis. Many of the people around me were two, three, or more to a bike. So many faces were covered with masks to protect against life-threatening pollution. The fossil fuel industry has the world fooled, I couldn’t help but think—billions are addicted to its products with nowhere else to turn.

One of the most incredible and outrageous things about the so-called “issue” of human-caused climate change is the mountain of credible evidence showing a decades-long, highly strategic effort by fossil fuel companies to prevent climate action.

ExxonMobil, for example, generated $32.5 billion in revenue in 2014 by extracting and selling oil and gas, and recently made clear that it intends to continue doing so without limit, explaining that serious emissions cuts from the world’s governments are “highly unlikely.” Dirty energy giants like Exxon and Koch Industries have spent millions funding conservative think tanks and their climate denial campaigns, and they’ve had a considerable impact—especially in the United States, where 72 percent of Senate Republicans don’t “believe” in the science.

There’s the fossil-funded deceit, and then there’s the lobbying. Shell successfully pushed to weaken European renewable energy targets in 2014, for example, while the coal lobby in Australia has undermined climate policy for many years. In 2008, the year Barack Obama took office in the US, oil and gas companies spent a combined $135 million lobbying in Washington DC; in 2014, it was $141 million. Revealingly, their lobbying peaked around $175 million in 2009, the year of the failed climate agreement in Copenhagen.

Even with the 0.8˚ Celsius of global warming that we have experienced so far, extreme weather events and other disastrous climate impacts are becoming the norm. The world’s poorest and most vulnerable are paying with their lives and their livelihoods—from sea-level rise in the Pacific Islands to the immense devastation wrought by Typhoon Haiyan (Yolanda) in the Philippines. Those creating the problem—the big polluters—continue buying social license and politicians, reaping astronomical profits, and receiving obscene government subsidies to the tune of $10 million per minute.

Who are the Carbon Majors?

In November 2013, a study commissioned by the Climate Justice Programme, which has come to be known as the “Carbon Majors” research, traced fossil fuel production back to the beginning of the Industrial Revolution to identify the biggest carbon criminals. It showed that 90 oil, coal, and gas polluters are responsible for two-thirds of the human-made carbon emissions in our atmosphere today. They include private and public companies, with ExxonMobil and Chevron topping the list, along with state-owned entities such as Russia’s Gazprom, and states themselves, such as China. The Carbon Majors research was hailed as “a crucial step forward” by Al Gore, and has been supported by lawyers, environmental and human rights organizations, and scientists around the world.

When Typhoon Haiyan struck in 2013, I was working with friends and colleagues from the Philippines at the UN climate talks in Warsaw. I watched helplessly as they tried to focus on their professional commitments while also attempting to locate missing friends and family members. It was a galvanizing experience, and a catalyst for an effort use the Carbon Majors research to drive a new approach to global climate policy.

The biggest fossil fuel producers have a moral and legal responsibility to pay reparations for the climate damage they have caused, and continue to cause. Recognizing and enshrining that principle could be a game-changer at December’s UN climate talks in Paris.

The Climate Justice Programme is proposing that the international community agree to place a levy at the point of all fossil fuel extraction, in order to unlock the billions of dollars needed to compensate for the climate damage being experienced by vulnerable nations. Alongside the Heinrich Böll Foundation, we are working to introduce this idea at the UN climate negotiations.

Instead of being passed onto consumers, the costs associated with the levy should be absorbed by the dirty energy giants that have long made extraordinary profits. The money raised should be held in an international fund specifically for the provision of financial support—for responding to an extreme weather event that has caused extensive destruction, for example, or assisting with the relocation of a coastal community subjected to rising seas. Even a minimal levy, of around $5 per ton of extracted carbon, could generate more than $50 billion per year to assist hard-hit developing countries.

Such a mechanism—which already exists in the context of oil spills or nuclear disasters—could be key to resolving the contentious international climate negotiations around “Loss and Damage,” a core issue for developing countries. Loss and Damage refers to the irreparable harm caused by global warming that cannot simply be “adapted” to. You can’t adapt to losing your family, your land, or your water.

Our proposal has many advantages. It would provide a new and predictable source of finance for the poorest and most vulnerable communities impacted by global warming; raise the cost of extracting fossil fuels; and ensure that the entities most responsible for climate damage are held to account. And it is consistent with international law, including the principles of “Polluter Pays” and “Do No Harm.”

The Carbon Majors levy is not a replacement for other sources of climate finance from rich countries. Rather, it is a new source of finance, and an opportunity to think differently about a major obstacle to tackling climate change.

Some say that the fossil fuel industry is merely meeting popular demand and should not be punished for it, but this is a profoundly misguided argument. With global energy and transportation systems under the control of large corporations, the choices available to consumers are extremely limited, even in the wealthy world. And many people in developing countries simply do not have the luxury of deciding to install solar panels on their home, or to switch to an energy-efficient heating and cooling system, or to purchase an electric car; in many circumstances, they do not have access to public transportation.

To safeguard our climate, we need to phase out fossil fuels by 2050 and switch to 100% renewable energy. In order for that to happen, big oil, coal and gas must accept their responsibility for the transition.

We demand that the biggest polluters do what’s right: Pay up!

Stephen Leonard is an Australian lawyer and President of the Climate Justice Programme. You can read the proposal for a Carbon Majors levy here.