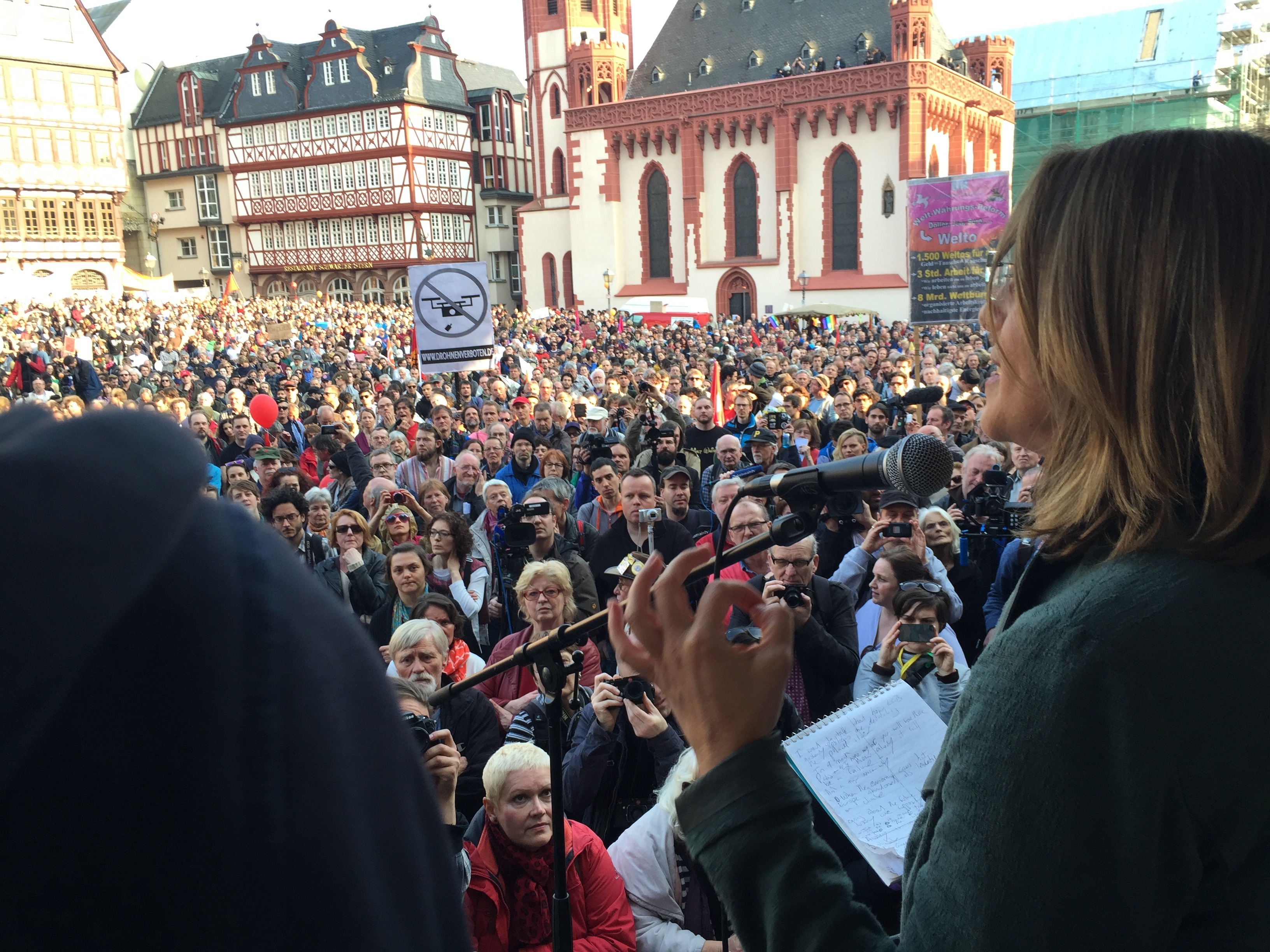 Naomi has begun a three-country European tour this week to launch the German, Spanish, Catalan, and French translations of This Changes Everything. And the response so far shows that the book is already changing the climate debate there, by giving a big boost to a discussion that Europeans have clearly been eager to have: what are the connections between capitalism and global warming? And what are the implications for how we tackle this crisis? 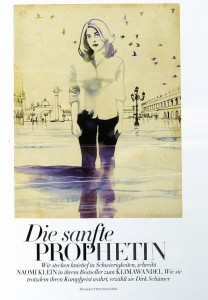 Consider the breadth of the audiences engaging with these questions in Germany, where Naomi’s interview got a mention on the cover of their edition of Harper’s Bazaar—obviously not a typical platform for rabble-rousing books about the need for economic system change.

But even more remarkable is the “world on fire” cover story recently published by Der Spiegel. The eminent, very mainstream German weekly—think Time magazine—not only did its ow 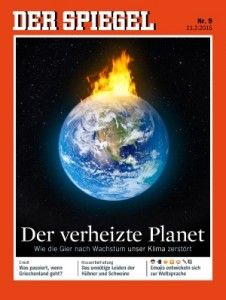 n Q&A with Naomi, but also used TCE as a jumping-off point to explore the capitalism-and-climate debate in depth and from its own perspective. “Regardless of whether one finds her standpoint to be plausible, radical or beyond the pale, it is difficult to disagree with one of her points: Our reaction to climate change is inversely proportional to the dimension of the problem it presents,” the journalists wrote.

And climate change is being increasingly integrated into the fight against austerity in Europe: look no further than the huge Blockupy protests in Frankfurt on Wednesday, with up to 30,000 marching to the European Central Bank to stand against the disastrous response of international elites to the economic and ecological crises. Naomi spoke to an energized crowd, making the case for how “austerity and privatization policies are destabilizing the planet itself.”

Some news outlets are going even further to shape these discussions. We were deeply honored that the UK’s Guardian newspaper chose TCE to kick off its historic “keep it in the ground” campaign this month, prominently featuring two long excerpts from the book as “wraparounds” of successive print editions—something that has rarely happened in the paper’s history. (You can read the two excerpts online here and here, and The Guardian also unveiled a 9-minute first look at the work-in-progress companion documentary film to TCE, directed by Avi Lewis). 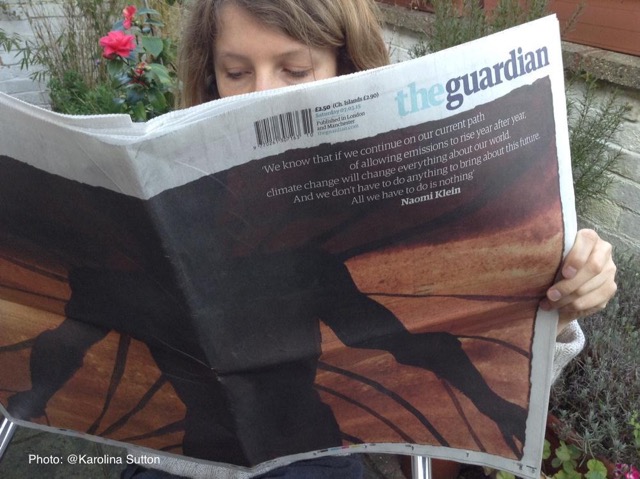 The Guardian’s outstanding and unprecedented climate push includes a “major series” of analysis and investigative reporting, centered on the stark reality that the vast majority of remaining coal, oil, and gas must stay in the ground to prevent catastrophic warming. It has also created a petition targeting the fossil fuel investments of the Gates Foundation and the Wellcome Trust, now with over 100,000 signatures. We have been incredibly inspired by this campaign, and urge you to follow to the paper’s climate coverage and advocacy over the coming weeks. 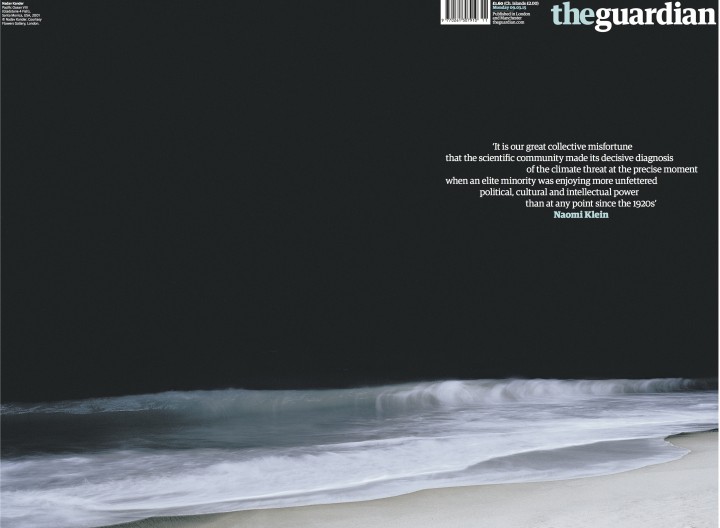 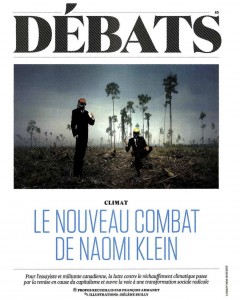 In Spain, meanwhile, TCE was greeted with two positive reviews in the print and online editions of La Vanguardia, Catalonia’s largest newspaper. And we were particularly thrilled that the book was given the cover of Télérama, France’s ubiquitous weekly cultural magazine, and that Naomi’s Q&A managed to occupy 5 full pages of L’Obs, the country’s key news and politics weekly.

By the way, the French language edition is also stirring up debate in Quebec, where Naomi appeared on the legendary talk show Tout le monde en parle. There’s really no equivalent to this program in the English-speaking world; it’s not an exaggeration to say that pretty much the entire province watches it, and the show is known for having the power to make the careers of politicians. (Watch Naomi’s appearance here—the questions were in French, her responses in English.) The book also m 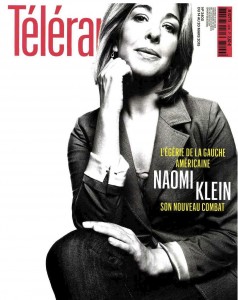 ade the cover of the respected Quebec paper Le Devoir with Naomi’s remarks on Energy East, the proposed tar sands pipeline that threatens to become the largest oil pipeline in North America.

All of us on the TCE team look forward to watching these debates gain momentum—we’re grateful for the opportunity to help bring questions at the heart of the climate crisis to new audiences, to amplify the vital work being done by climate justice activists around the world, and to highlight the critical links between that work and anti-austerity battles. And we intend to do our part to keep the pressure up.