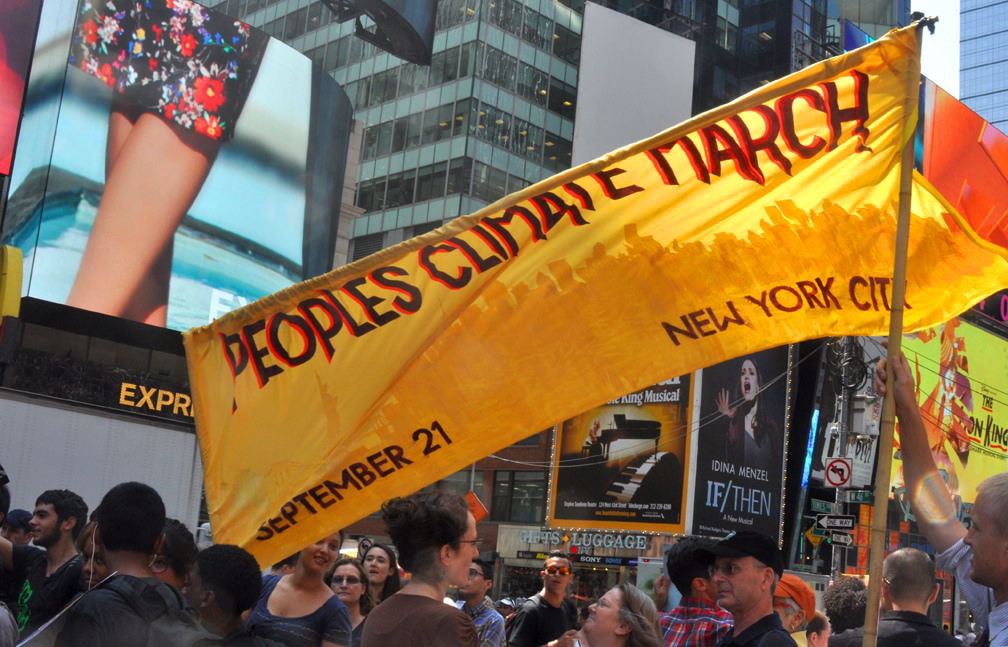 The most important climate gathering next week will not be happening at the UN, but in the streets: thousands upon thousands of us will be sounding the climate alarm, literally, at the historic People’s Climate March on September 21. While the decision was made not to have speeches during the march, at 12:58pm there will be two minutes of silence followed by the unleashing of a chorus of magnificent sound—part of what organizers are describing as a global call for climate justice—complete with church bells and some 32 marching bands. (Bring your noisemakers!)

The sounding of the climate alarm is an important metaphor: it reminds us, as I write in my book, that “politicians aren’t the only ones with the power to declare a crisis. Mass movements of regular people can declare one too.”

And many of the people making the noise are already showing us the path forward, the real exits from the crisis. They are, for example, the daring activists saying “No!” to new carbon frontiers around the world—heroic denizens of a global, roving conflict zone known as Blockadia, waging nonviolent resistance to fossil fuel expansion plans and putting their bodies on the line from East Texas to the Niger Delta, to Northern Greece.

And they are the frontline communities most directly impacted by extraction and climate change, who are also pioneering some of the most exciting models for making a “just transition” away from fossil fuels. (Like solar co-ops in Richmond, California, where workers have been living under the shadow of the local, notoriously dirty Chevron oil refinery; or a Navajo proposal to convert abandoned mining land on their reservation into solar arrays that could power their communities and urban centers beyond; or the idea that we could compensate Indigenous groups for protecting the carbon buried under their ancestral forests or sequestered in the trees, instead of kicking them out in order to safely market forest “offsets” to polluting corporations.)

They are also the dogged young campaigners of the fossil fuel divestment movement, which has swept across hundreds of campuses, cities, states, charitable foundations, and religious institutions with startling speed. This is just the first stage of a growing effort to delegitimize the profits of the fossil fuel industry, and – most excitingly – to figure out how to redirect those resources in the service of real climate solutions.

“To change everything, we need everyone,” goes one of the slogans of the People’s Climate March, and that is absolutely right: our movements and solutions must be as varied and numerous as the depth and scope that this crisis demands. We need everyone in the climate fight—the labour movement, health care workers, teachers, farmers, everyone defending the public sector and community values and solidarity where they live. We’re not there yet, but powerful glimpses of the kind of deep and diverse movement we need are starting to appear.

That is what this march is about for me: it is an expression of how profoundly the climate movement has changed since the days of elite summit hopping and the inside-game of beltway cap-and-trade fights. Indeed the People’s March is the physical convergence of many new and resurgent climate movements, united in their firm belief that the time to confront the climate criminals in now.

And these movements are ready for a fight. On the day after the family-friendly march, many will be back on the streets, engaging in civil disobedience at centers of financial power around the world—including, of course, Wall Street.

Two years ago, the force of Superstorm Sandy literally flooded New York’s financial district. Who can forget the image of Goldman Sachs surrounded with sand bags. Or the cover of Bloomberg Businessweek, with the headline, “It’s Global Warming, Stupid.”

The thing is: capitalism is kind of stupid. The big brains on Wall Street all know climate change is real. They go on about “stranded assets” and “carbon bubbles” and climate change creating an atmosphere of “risky business.” But even knowing all these medium and long term risks to their very survival, they still can’t resist the short term profits that flow from cooking the planet. As I explore in my book, former NY mayor Michael Bloomberg himself – perhaps the most climate conscious billionaire going — invests his personal fortune in a fund specializing in oil and gas assets.

Clearly, Wall Street needs some help. Which is why we are going to flood them again. With our bodies this time. Wearing blue. If you are in the neighbourhood, come too.