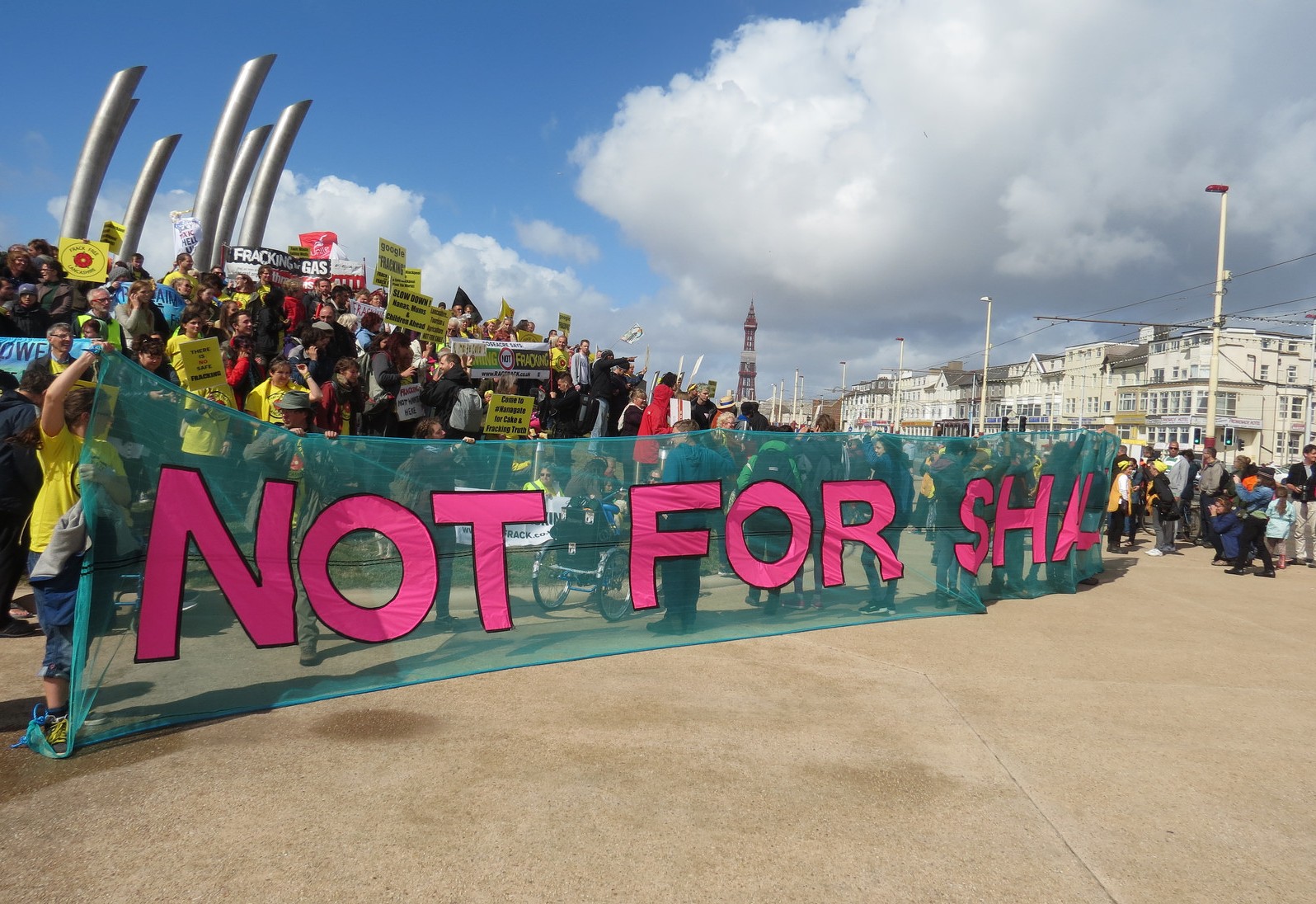 David Cameron’s “dash for gas” amounts to an all-out assault on democracy, as the campaign group Talk Fracking has made vividly clear on this blog. It has also provoked a spectacular surge of direct action to keep the gas in the ground, and the drillers out of our politics—only the latest front of a broader, ongoing struggle to defend and expand the idea of a commons in the UK and beyond.

These acts of resistance can also be transformational spaces and experiences. And to reclaim our democracy, we will need many more of them.

It sounds like a tall order, but such spaces are not new. Indeed they have driven the history of some of the most creative street protests, occupations, and alliances that have been formed in the global North in recent decades. Having been involved in radical activism for the past 15 years, I can speak to a sense that the global justice “movement of movements” of the early 2000s never really went away, but rather has become dissipated as wars, ever more violent neoliberal economic policies, and the right-wing climate change denial lobby have advanced.

The battle for a commons has continued. But on the British left today, tactics, areas of focus, and constituencies are shifting, and this is a positive thing.

Everywhere the gas companies have tried to drill, local groups (numbering 150 plus now) and anti-fracking “protection” camps have emerged to try to stop them—with tenacious and enduring resistance in the village of Balcombe in the southern English county of West Sussex, at Barton Moss in the northwest, and at several other sites, where lively bodies standing in the way of trucks and gates have managed to delay or even shut down drilling. There have also been large, week-long camps using the same tactics—while also launching multiple satellite actions targeting broader fracking industry interests, sponsors, and investors—organized by the Reclaim the Power network.

Community protection camps strengthen solidarity and catalyse confidence, and they have had a real impact on our opponents. As one market watcher told me, “The people walking in front of the lorries are killing the industry.”

None of this is unique to the anti-fracking fight. Spaces and experiences of resistance have opened up wide over the past five years—some planned, some spontaneous. Countless student and labour movements have furthered an anti-capitalist, economic justice agenda, and their work can be seen on numerous fronts, from the September revolt against Westminster in Scotland—which saw an astonishing turnout of 90%, with 45% of those voters endorsing Scottish independence—to rousing actions against the privatisation of education, tax avoidance, and public service cuts, to successful campaigns to stop privatisations within the National Health Service or to stand up for worker and housing rights.

We saw possibly the biggest urban uprisings in generations in 2011, following the racist killing of Mark Duggan in North London by the Metropolitan police; there were waves of university occupations over Israel’s 2009 assault on Gaza (no less than 27) and against skyrocketing tuition fees; Occupy mobilized hundreds to hold ground and political space for months outside the London Stock Exchange and St Paul’s Cathedral; and the anti-austerity network UK Uncut set the bar high on social media activism, sparking reproducible confrontations at dozens of tax-avoiding banks and corporate stores.

A leftist, join-the-dots politics built on greater unity between progressives, socialists, and anarchists is emerging—although the dimmest dot has historically been climate change. The Reclaim the Power camps are experiments in bringing social and economic justice campaigning more explicitly into climate activism. They have focused on our common experience of a democracy deficit which allows the government to slash the public sector, press ahead with planet-warming energy policies, and attack the most vulnerable people in our society—the disabled, single mothers, pensioners, and immigrants.

‘We’ are still everywhere, but are we everyone?

Alongside energy democracy campaigners with the grassroots group Fuel Poverty Action and Green Party leaders, members of the Greater London Pensioners Association, Disabled People Against Cuts, UK Uncut, and Occupy were all there in Balcombe last year, shutting down the operations of would-be fracker Cuadrilla.

For participants such as myself, longer term community protection camps and shorter mass action camps have helped to forge connections that can be genuinely revolutionary. In advance of this year’s Reclaim the Power in the northwest town of Blackpool, we held a meeting in Birmingham bringing together an anti-fracking activist who had been sued for £5 million by the energy giant EDF, a student suspended by her university for protesting exploitative tuition fees, and a Muslim organizer from CAGE, a group challenging the War on Terror. In August, at the Blackpool camp itself, climate campaigners were joined by public sector union leaders, a Labour Party councillor, Polish warehouse packers, University of London cleaners fighting for fair pay, and blacklisted construction workers.

These new relationships build common ground, centered around empowering resistance to state and corporate repression. Sustaining them after “Big Bang” events, however, requires continuing mutual aid and solidarity. That can be difficult in the face of punitive and time-sapping work and welfare regimes—and in the often silo-like, compartmentalized, and increasingly professionalized world of campaigning.

Reclaim the Power was a launchpad for new forms of direct action planning that can help address these challenges. This year, fourteen satellite protests took place around the UK on a coordinated day of action, targeting every aspect of the shale gas industry—including not only drilling and other energy firms, but PR companies, corporate-sponsored university and government departments, and pro-fracking MPs. All of the roughly 500 camp attendees took part in “Direct Action Speed Dating,” a system pioneered at last year’s Reclaim the Power, designed to make sure that everyone could get involved—many for the first time—according to their needs, level of experience, and ability to be arrested.

Not everyone wants to go camping. These gatherings are remote, and prone to heavy-handed policing; although no one went to jail at Blackpool, the Barton Moss camp suffered violence and dozens of “pre-emptive,” trumped up arrests. They can put off people from communities that are already heavily criminalised, and those who understandably fear knock-on effects on their chances of getting or keeping work, given the punishing UK welfare system and a proliferation of low paid and precarious jobs. There have also been critiques of direct action as an addictive preserve of the privileged, encouraging a short-term, media-oriented culture in which the work of longer-term community organizing becomes neglected.

But people from all walks of life take it. And resistance is inspiring. It ruptures the status quo and captures people’s attention, imagination and hope—whether it’s striking nurses or activists standing on a fracking truck, or hundreds “chappin’ on doors” all over Scotland to listen to people who would never describe themselves as political getting really political. A slogan of the Reclaim the Streets movement of the late 90s was “Resistance is Fertile,” and that is no less true today. Transformational spaces and experiences not only confront, expose, and delegitmize elites—they also push us out of our comfort zones, and force us to live and work together.

Everyone will not do everything. But as a movement, we need to be able to shut down power stations as well as hold coffee mornings with pensioners. Spend time at scraggly roadside anti-fracking camps and lead climate change workshops in schools. Be active in trade unions, and join anti-workfare pickets. If we want to join the dots between climate, economic, and social justice, then we need to act in solidarity with other struggles, and come to know them as our own.

Ewa Jasiewicz is a union organiser and journalist and part of Reclaim the Power, Fuel Poverty Action, and London Palestine Action.